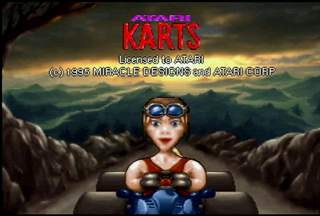 JTS Atari has decided to put the fun back into Jaguar games, Colin Polonowski has a look at their latest offering, Atari Karts...

Jaguar games eh? You wait for a good game and then several come along at the same time!

The first thing you notice about Atari Karts is that it bears an uncanny resemblance to a game featuring a certain Italian plumber. Not that this is a bad thing mind you, Super Mario Kart was a very playable game, let's just hope the Jag version's as good!

The first thing to hit me was the graphics. Upon loading you are displayed a picture of one of the characters who you'll be racing. I could immediately see that graphically the Jag version of the game wins hands down. In the game, the story is much the same. The backgrounds and sprites are all well drawn and the game plays very smoothly.

At first, it seemed slower than the SNES game but after playing for a few minutes I completely forgot about this and set about racing around the track.

The game is split into four difficulty levels, and each is made up of four 'cups'. The first three cups are available at the start but in order to play the fourth cup, The Miracle Cup, you must have completed the other three. Upon completing the Miracle Cup you are awarded with a better Kart and you are allowed to move up to the next difficultly level.

The game is, initially, difficult to get to grips with. Once you get used to the main controls you'll fly through the first few cups with ease. This is where you'll notice the lack of variety in the tracks, in fact on the first two cups of each level the tracks are identical but reversed. As you progress through the difficulty levels you'll end up playing the same tracks over and over again.

Sound wise, the game is significantly less impressive. The tunes are fine, they may not push the Jag to its limits but they aren't too bad. The sound effects on the other hand are poor, the engine sound can become very irritating in a very short period of time and you'll probably end up turning them down or off.

Another feature which the Jag version lacks is the battle mode. In the SNES game there is a section where two players can battle each other over a specially designed track. This hasn't been included in the Jaguar version and it does limit the game somewhat.

If you have the new Pro-Controller you'll find it a lot easier to control your Kart. On the new pad, some key pad keys have got duplicates around the main keys. Atari Karts makes use of buttons four and six which are conveniently found just underneath your index fingers.

Thankfully the game does have a two player mode and this'll give the game a lot more depth. Its always more challenging to race a human opponent.

If you have the money, Atari Karts is certainly a worthwhile purchase. It is expensive but it is also very playable and one of the best Jag games to date.